Along with the so-called Irish temperament, it is no secret that Irish are famous for their wicked sense of humor.

The Irish just had to seize every opportunity to make a pun, point out an irony, make fun of their love for beer or whiskey – even the dead aren’t spared. And don’t forget those silly Saint Patrick’s Day jokes, either!

Here are 20 of the best Irish jokes to get your friends Dublin over with laughter.

20 Best Irish Jokes That You Should Know! 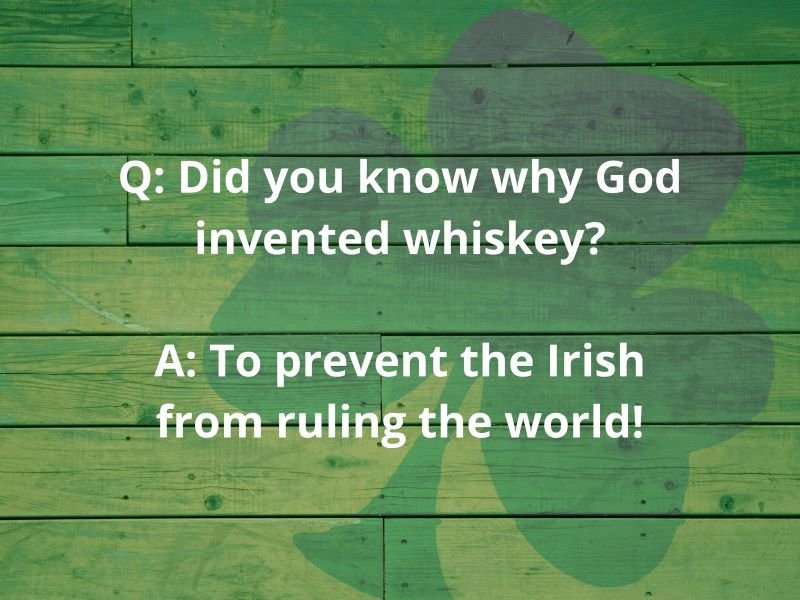 Q: How can Irish people tell when it’s summer?

A: The rain gets warmer.

An American lawyer asked Paddy: Why is it that whenever you ask an Irishman a question, he answers with another question?

Paddy answered/asked: Who told you that?

Ireland you money, if you promise to pay me back.

Q: How do you know if an Irishman is having a great time?

A: He’s Dublin over with laughter.

Q: What do you call an Irish baker?

A: Definitely a gingerbread man!

You don’t want to press your luck.

Q: What do you call a fake Irish stone?

Q: Why shouldn’t you borrow money from a leprechaun?

A: Because they’re always a little short.

Q: What do you get when two leprechauns have a conversation?

Paddy and Murphy are working on a building site. A few hours into work, Paddy tells Murphy he wants to get the day off. “I’m gonna’ pretend I’ve gone mad!”

As Paddy leaves the site, Murphy starts packing his things to leave as well.

“Where do you think you’re going?” asks the foreman.

Liam left Dublin to go up to Belfast for a bit of skydiving, On Sunday afternoon, he was found in a tree by a farmer,  “What happened?” asks the farmer.

RELATED READ:  9 Best Pubs In Kilkenny To Have A Pint and More

“Well,” the farmer said. “If you had asked the locals before you jumped, they would have told you nothing opens here on a Sunday.” 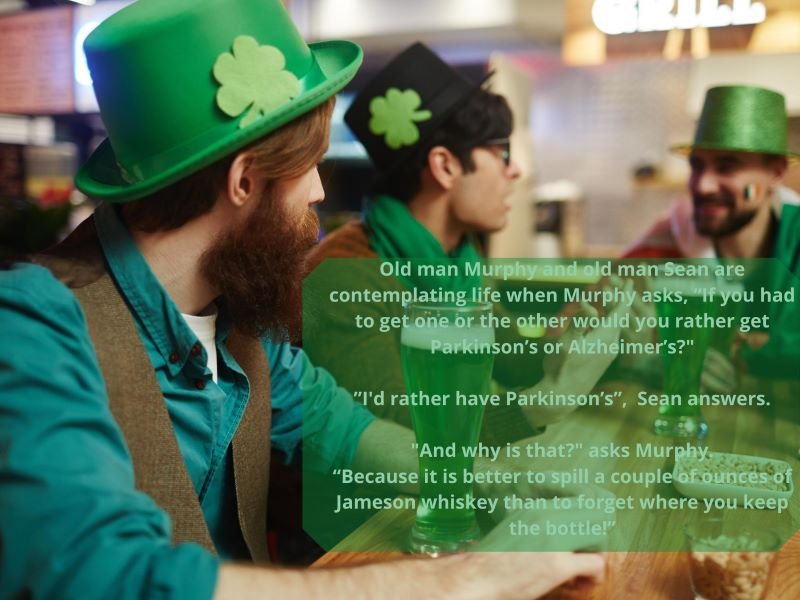 Q: Did you know why God invented whiskey?

A: To prevent the Irish from ruling the world!

Old man Murphy and old man Sean are contemplating life when Murphy asks, “If you had to get one or the other would you rather get Parkinson’s or Alzheimer’s?”

”I’d rather have Parkinson’s”,  Sean answers.

“And why is that?” asks Murphy.

“Because it is better to spill a couple of ounces of Jameson whiskey than to forget where you keep the bottle!”

Murphy, Collin, and Celia are drinking in a pub when a drunk comes in, staggers up to them, and points at Collins, shouting,

“Your mum’s the best shag in town!”

Everyone expects a fight, but Collin ignores him, so the drunk wanders off and orders a pint of Guinness at the other end of the bar.

Several minutes later, the drunk comes back, points at Collins again, and says,

“I just screwed your mum, and it was grand!”

Again Collin ignores him, and the drunk goes back to the other end of the bar for another pint.

Ten minutes later, he comes back and announces, “Your mum said it was the best thing since sliced bread!”

A cop pulls up two Irish drunks, and says to the first, “What’s your name and address?”

He answers, “I’m Daniel, of no fixed address.”

The cop then turns to the second drunk and asks the same question.

He replies, “I’m Shane, and I live in the flat above Daniel.”

Every night, an Irishman walks into a bar and orders three shots of whiskey. He consumes each shot, pays the barman, and leaves.

One night, the bartender finally asks him why he always drinks exactly three shots.

“It’s one for me and one for each of my brothers,” he tells the bartender. “One is in America and the other is in Australia, and we do this to feel like we’re all still drinking together.”

A few weeks later the Irishman only orders two shots of whiskey.

“Oh no,” the barman says. “I’m sorry for your loss. Was it the one in America or Australia?”

RELATED READ:  The Great Potato Famine: History And All The Things You Need To Know

“What?” The Irishman looks confused, then glances at the whiskey glasses. “Jesus no, it’s nothin’ like that. It’s just that I’ve decided to stop drinking.”

A drunk Irishman is driving home from the city one night and, of course, his car is swerving violently all over the road. A cop pulls him over. “So,”  the cop says to the drunk driver, “where have ya been?”

“Why I’ve been to the pub of course,” slurs the drunk.

“Well,” the cop tells him, “it looks like you’ve had quite a few to drink this evening”.

“I did all right,” the drunk answers with a smile.

“Did you know,” the cop stands straight and folds his arms across his chest, “that a few intersections back, your wife fell out of your car?”

“Oh, thank heavens,” the drunk exclaims. “For a moment there, I thought I’d gone deaf.”

In New York, Seamus was tending bar when a fellow Irishman comes in and orders a beer and a shot. A few minutes later, another comes in and they start a conversation.

“Let me buy you a drink in memory of my motherland, Ireland,” the first offers.

“Ireland?, I’m from Ireland too. I come from Dublin. Let’s drink to Dublin!” says the second. “Dublin? Why I grew up there. Went to St. Mary’s.” the first man replies.

“Me too,” answers the second. “Seamus, another round!”  the first tells him

And so it went. A short time later another Irish guy comes in and asks, “Hey Seamus, What’s going on here today?”

“Nothing much,” the bartender replies, “Just have the O’Reilly twins in drunk again.”

In a pub, the barman says to Paddy, “Your glass is empty, fancy another one?”

Paddy looks at him incredulously and says, “Why would I be needing two empty feckin’ glasses?”

A drunk Irishman is stumbling through the woods, when he chances upon a preacher baptizing people in the river.

He walks into the water and bumps into the preacher. The preacher turns around and recognizes the smell of alcohol, so he asks the drunk. “Are you ready to find Jesus?”

The preacher grabs him and dunks him in the water. He pulls him up and asks, “Brother have you found Jesus?”

The drunk replies, “No, I haven’t found Jesus.”

The preacher dunks him into the water again for a bit longer. He again pulls him out of the water and asks, “Have you found Jesus, me brother?”

The drunk shakes his head, “No, I haven’t found Jesus.”

This time the preacher dunks the drunk in the water again and holds him down for about 30 seconds. When he starts kicking his arms and legs he pulls him up.

The preacher again asks the drunk, “For the love of God have you found Jesus?”

The drunk wipes his eyes and catches his breath and asks the preacher: “Are you sure this is where he fell in?”

Ever heard about the Irishman that drank 100 liters of the dark stuff in just 30 minutes?