Bull Rock Island is located about 4 kilometers away from Dursey Island and 9 kilometers from the mainland of County Cork.

The rock is 93 meters high and is actually a small island. It has stunning jagged cliffs, a tunnel where boats can pass and a lighthouse.

It is regarded as one of Island’s best remote attractions and a great stop if you’re doing the Wild Atlantic Way road trip. 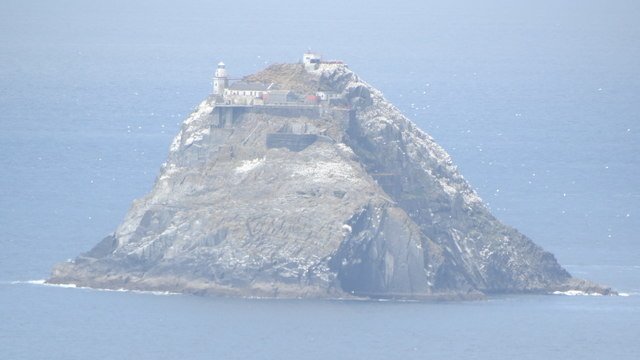 The Bull Rock Island is situated on a sea transit at the tip of the Beara Peninsula and the entrance to Kenmare River. It is a few kilometers away from the more popular Dursey Island. The Rock is also the most Southwesterly point from the Beara Peninsula.

This island rock looks straight put of a fantasy film set, with its green sandstone and purple siltstones surface that was formed more than three hundred million years ago

The Bull Rock is a bit older than the Cow Rock, the old red sandstone that you’ll see on the way. This intriguing rock island, like most natural destinations in Ireland, is steeped in folklore.

Legend has it that the tunnel-like passage of Bull Rock is the ‘Gateway to the Underworld’.

Comprised of dramatic, rocky cliffs, Bull Rock looks quite mysterious. Apart from the lighthouse, there are stone structures built on the cliffs. These buildings are proof that people lived here for a time.

However, these dwellings have been abandoned for a long time, which gives the island a more intriguing air.

As you approach the island, you will easily see the lighthouse, as well as the old Gas Works on the rock’s eastern part.

If the Atlantic’s unpredictable weather allows, visitors, can also pass through the rock’s natural tunnel.

The Bull Rock is also known as the nesting place of a small colony of Atlantic Gannet, which is Europe’s largest nesting seabird.

A post shared by Walter the Violet Alpaca (@walterthevioletalpaca) on Aug 2, 2020 at 9:55am PDT

Built in 1889, the  Bull Rock lighthouse was a replacement to the original cast-iron lighthouse that was in the nearby Calf Island. The old lighthouse was severely damaged by a storm.

The Bull Rock island had between one and seven men who lived on the island to work in the lighthouse from 1901 to 1991.

They were the ones who manually kept the structure lit to guide old save those that are traveling in the Atlantic.

The Bull Rock Lighthouse became fully automatic in 1991. The original lantern and optic were replaced by solar-power LED lights.

The old equipment and building are still in good condition, though, with occasional visits to keep the lighthouse in good shape. The lighthouse is not open to the public for visits, to help preserve the area and for safety purposes.

Apart from the lighthouse, the abandoned dwellings, and gannets, the Bull Rock also looks like it has been painted on.

Depending on the time of your visit, you’ll see splashes of pink and white sea thrift especially the area close to the lighthouse.

Since visitors are not allowed in the lighthouse, a highlight of any visit to the Bull Rock is passing through the tunnel. It is like those triumphal arches built across Europe to celebrate war victories, but more mystical.

The Bull Rock is indeed a must-visit for those who love venturing into the wild and mysterious.

It is quite captivating even if you’re only seeing it from the boat, and one of the most unforgettable sights in this part of Ireland.

Passing through the tunnel is quite an experience, like going into a different realm as the boat emerges on the other side.

Whether you’re looking for cool stops along the Wild Atlantic Way or simply exploring Cork, a trip to Bull Rock is a must-experience.

RELATED READ:  Killarney House and Gardens: History and All You Need To Know
Tweet
Pin8
Share
8 Shares
Slieve League Cliffs – Things To Do And See
When Is The Best Time To Visit Ireland?