You may have heard of leprechauns, fairies and banshees, and other folklore characters that tell intriguing stories and origins.

Here are some of these Irish mythological creatures, and their origin stories that you may not have heard of. 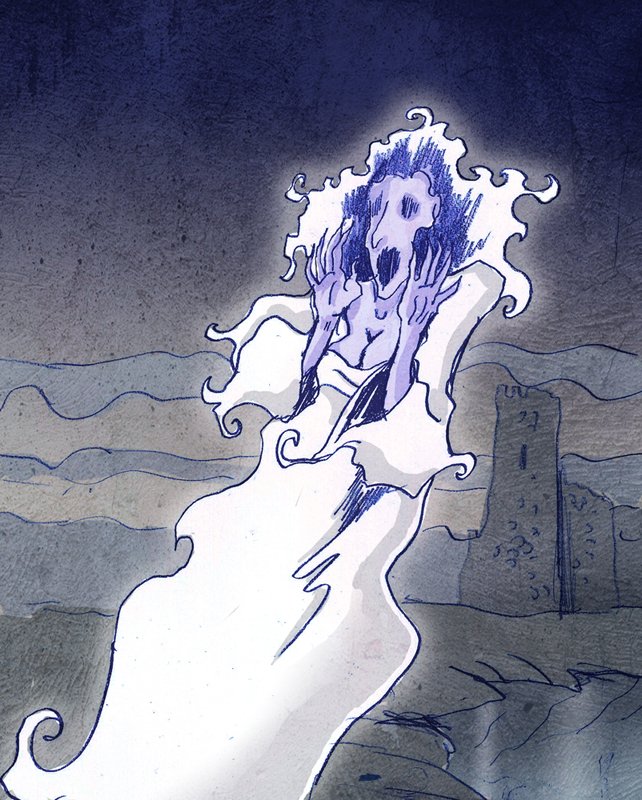 Considered as an omen of death and the fear of every child, the banshee is one of the scariest creatures in Irish folklore.

It is said that when a banshee is seen or if anyone hears her wails, it means someone is about to die.

The banshee often appears as a young woman, a matron, or an old hag,  that wears a white cloak. Banshees can also take the form of a crow, stoat or weasel which are known to be associated with witchcraft.

It is said that the Abhartach was Bram Stoker’s inspiration for his novel, Dracula.

Also referred to as Dwarf King, these Irish folklore creatures are little yet powerful tyrants When he died, he rose from his crypt and fed on the blood of his victims.

According to legend, if you want to silence an Abhartach forever, one must find his crypt. The Abhartach should then be bound and buried upside down when pierced with a sword of yew.

The old tales call Carman or Carmun as the Celtic goddess of evil magic.

She prowls around with her three equally evil sons Dub (“darkness” in Irish), Dother (“evil”), and Dain (“violence”), and their mission is always to cause destruction and devastation.

There is another legend that says Carman cursed Ireland’s crops and terrorized the Irish.

When the Tuatha De Danann, the “peoples of the goddess Danu,” came to the rescue. The sons were driven across the sea, while Carman was imprisoned and eventually died of grief.

Today, she is remembered yearly in a festival that marks the start of harvest in  Leinster in Ireland’s Great East.

RELATED READ:  13 Awesome Things To Do In Meath, Ireland

4. Dearg Due – the Irish vampire

Dearg-due means “red bloodsucker,” and in Irish folklore, it refers to a female demon that seduces men and then sucks and drains them of their blood.

The origin of this creature is told in the Celtic legend about a woman who was known all over Ireland for her beauty.

She fell in love with a peasant, which was frowned upon by her father. She was then forced to marry a rich man. This rich man treated her terribly and she eventually committed suicide.

A year after her death, she rose from her grave as a vengeful spirit.

Not all Irish folklore creatures are sinister, there are those that are actually generally good such as the Daoine Maithe.

They are fairies, usually resemble humans, and possess supernatural abilities. The Daoine Maithe are said to have originated either from fallen angels or they are the descendants of the Tuatha Dé Danann.

As fallen angels, their sins were not great enough to warrant a lifetime in hell so they were sent to earth as fairies instead.  The other story says that fairies are from the magical being called Tuatha Dé Danann.

They occupied Ireland before the current inhabitants, the Milesians, or the final race to settle in Ireland. The Daoine Maithe are usually kind creatures but becomes cruel when mistreated.

Commonly known in Irish folklore as the foreteller of death, the Dullahan is the Irish counterpart of the headless horseman.

The Dullahan rides a  black horse with flaming eyes, while he carries his severed head under one arm. He just keeps on riding, the horse keeps on running but when they stop – a human dies.

There are stories that say the Dullahan throws blood at people he passes or announces the name of the person that’s about to die.

Like the evilest creatures in Irish folklore though, the Dullahan has a weakness and it is gold.

If ever you’ll be walking or driving at night in Ireland, better wear something gold so the Dullahan won’t throw blood at you or call your name.

They say these mythical water horses are often spotted in Scotland, but they are part of Irish folklore as well.

These evil creatures are said to appear to weary travelers, enticing them for a ride. Once a traveler hops on, the horse takes them on the last ride of their life.

They take to the waters, jumps high then submerges, bringing the traveler along with them to drown.

If ever you see a soaking wet horse during a hike, best to avoid them and keep walking.

The Leanan Sidhe is another Irish folklore creature that resembles a vampire. They are both a muse and demon, said to prey on artists, musicians, and writers looking for inspiration.

The Leanan Sidhe appear to these hapless souls, offer inspiration by asking them to be her lover.

She would share with them her creativity, intellect, and magic. Then she would leave them and make those men so depressed they would die.

The Leanan Sidhe will then take their dead lover back into her lair, collect their blood into a cauldron, which is the source of her youth, beauty, and artistic inspiration.

9. Leprechaun – The Symbol of Luck

Easily the most popular creature in Irish folklore, the leprechaun is also considered the Irish symbol of luck.

The leprechaun is often described to be a small, jolly elf-like creature with a ginger beard and green hat.

He collects gold and hides them in a pot at the end of the rainbow.

When you see him, he must grant you three wishes before he can be released. You must be wise in making these wishes though because he might trick you.

Today, the leprechaun has also become a mascot for St. Patrick’s Day, as well as a favorite design in Irish souvenirs.

Farewell 🧡☀️✨ It’s been a while, but Beck and Kip are still in my heart and drifting in between short story drabbles in my free time. #oc #beckandkip #mermaid #merrow #sunset #ocean #aesthetic #digitalart #digitalillustration #illustration #art #artistsoninstagram #lgbtq🌈

Not to be confused with a mermaid or merman, a merrow is an intriguing creature from Irish folklores that are said to live underwater.

The word Merrow is from the Irish words Muir, meaning sea and Oigh, the maid. Marrow-men are horribly ugly male sea-creatures, while the females or the Merrows are absolutely beautiful.

They have human-like legs and huge, flat feet and webbed fingers.

These creatures, especially the Merrows are amazing swimmers, and this ability is said to come from their clothing, which varies depending on which part of Ireland you’re in. It could be a cap or a cape.

RELATED READ:  11 Best Things To Do In Donegal, Ireland

If a Merrow wants to walk on land, she must abandon her cap or cape. If a human finds and hides these items, the merrow must agree to be his wife.

However, when a merrow finds her cap or cape again, she is overtaken by the desire to return to the water and leave her husband and children.

In Ireland, there are those who claim to be descendants of merrows who were caught by fishermen in their nets.

Said to be the scariest type of fairy in Irish folklore, the Pooka are primarily creatures of the night.

These evil fairies take the shape in black horses, who stampede through fences, crops, and properties, causing damage and destruction.

They are wicked, violent tricksters who are different forms depending on which part of Ireland you’re hearing a Pooka story from. They can also take the form of a dark eagle, some boogeyman character, or goblin.

They say that when a chicken or cow sees a Pooka, the animals become too traumatized that they cannot produce eggs or milk for weeks. Pookas can also imitate human voices and they use it to call them out of their houses.

If a human emerges, he will be dragged outside and killed. If nobody comes out the pooka will destroy their property.

Sluaghs are heightening creatures that hunt down souls. They are not exactly demons, they are more like dead sinners that come back from the grave and roam the kind of the living as malicious spirits.

These scary spirits are said to come from the west, and they fly in groups. They go to houses where someone is about to die or dying to steal that person’s soul.

To prevent the Sluaghs from entering their houses, Irish families would keep their west-facing windows shut.

Tweet
Pin2
Share
2 Shares
Drinking Age In Ireland: Drinking Laws And Tips
Dunguaire Castle History And All The Things You Need To Know