Dublin’s Ha’penny Bridge is a pedestrian path that crosses the Liffey River. Pronounced as ‘hey-penny’, it is among the most recognizable sights in Dublin. It is officially called the Liffey Bridge and was the only pedestrian bridge in the city for nearly two centuries until Millennial Bridge opened in 1999.

Ha’penny is a perfect arch that’s 141 feet or 43 meters and made of cast iron. It is one of the earliest bridges of its kind, with iron limbs, decorative arches, and pretty lampposts. It is now a favorite spot for photos among Dublin locals and tourists alike.

Ha’penny Bridge is also adjacent to Dublin’s most popular spots, open and free every day. It has become such an integral part of Dublin’s life that one cannot imagine that there wasn’t even a bridge over River Liffey centuries ago.

Before the construction of a bridge over River Liffey, people who wanted to cross the river had to ride passenger ferries. This is a daily occurrence that was rather inconvenient that city officials talked to the owner of the ferries William Walsh. It was a  choice between paying for substantial repairs on his ferries or having a bridge built across the river.

Walsh opted for the bridge, as long as he is entitled to a toll fee of a halfpenny (ha’penny) for the next one hundred years. There were turnstiles at either end of the bridge to ensure people will pay the ha’penny before crossing.

It was only removed in 1919, and the name had stuck. The bridge may have been free of charge for a century now, but it’ll always be known as Ha’penny. 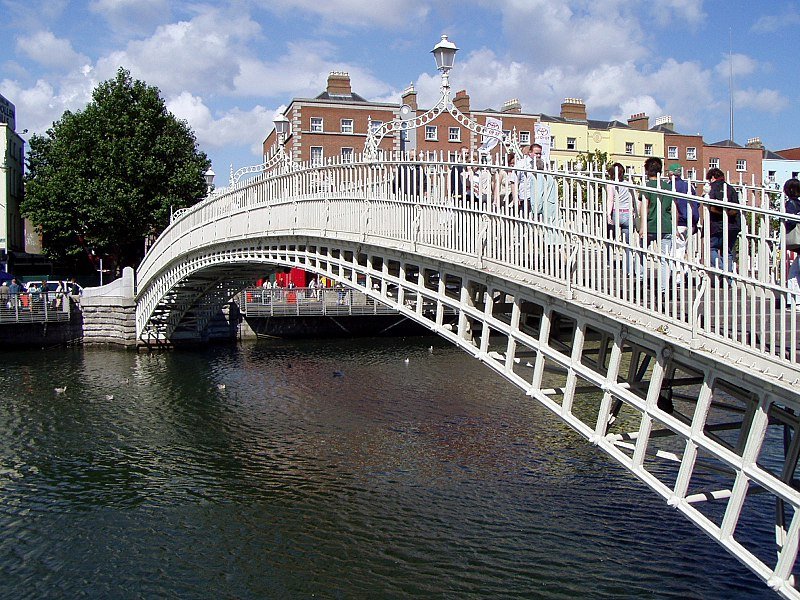 Aside from the colloquial Ha’penny and the official name Liffey Bridge, this structure was also called Wellington Bridge. It was named after the Dublin-born Duke of Wellington. That name didn’t last when the independent Irish Free State was established in 1922.

Since then, many other Dublin landmarks named after members of the Protestant Ascendancy have been changed.

Today, the bridge is among the busiest in Dublin, with 30,000 pedestrians crossing it every day.

In 2001, the bridge underwent renovation using 85% of its original rail work. For a time, the Ha’penny Bridge was known for the ‘love locks’ attached to its white railings.

These love locks are padlocks with lovers’ names on them, just like in the Pont des Arts in Paris. There were numerous attempts to discourage couples from attaching love locks to the Ha’penny. 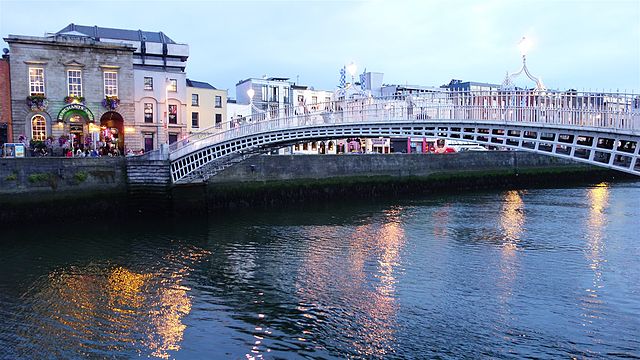 The ban was finally enacted in 2013 after 300 kilograms of love locks were removed from the bridge. This move was to protect this popular Dublin structure and to not compromise the safety of pedestrians who use the bridge.

Being located in the heart of the city, the Ha’penny Bridge is one of the busiest places in Dublin. The bridge links two popular areas of the city — the O’Connell Street and Temple Bar.

O’Connell Street is a vibrant stretch lined with Irish pubs and shops. This is where The Spire is located. It is a 390 feet tall monument in the shape of a needle, made of stainless steel.

Temple Bar is the ultimate party capital of Dublin, with bars, pubs, and great live music.

From the Temple Bar area, attractions like the City Hall and the Dublin Castle are within easy walking distance.