Drimnagh Castle or Caisleán Dhroimeanaigh” in Irish is a Norman castle in Drimnagh, a suburb of Dublin. It is known as a great example of an old feudal stronghold. The castle is also the only one in Ireland that’s surrounded by a flooded moat.

Idyllic and picturesque, Drimnagh Castle used to be one of the longest continuously inhabited castles in Ireland.

There may be a school located in the Drimnagh Castle grounds now but this place continues to attract visitors to marvel at its dreamlike structure. It is also one of the must-see castles in Dublin.

Drimnagh Castle: History and All Things You Need To Know 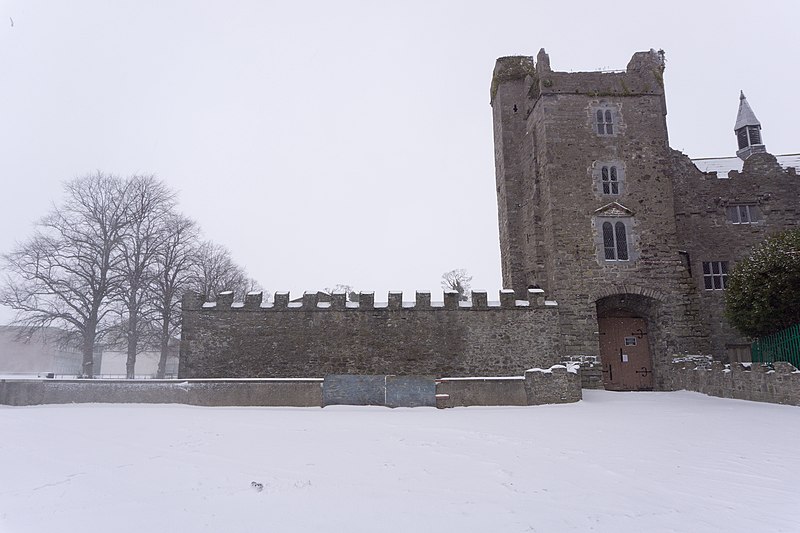 Thousands of years ago, the area where the castle was built was covered with forests. The river around it had an abundance of fish and waterfowl. The forested area meanwhile had herds of deer, wild boar, and wolves.

Neolithic people created burial mounds on the grounds surrounding Drimnagh, Crumlin, and Greenhills. The Neolithic people were replaced by another group of people during the Bronze Age, then the Vikings, and finally, the Norman invaders. This last group of people played a significant role in what soon became the Drimnagh castle.

It started when the lands of Drymenagh and Tyrenure were given to a Norman knight in 1215. This Norman knight was Hugo de Bernivale, who came in with Strongbow.

The lands were granted to him because of his family’s help during the crusades and the invasion of Ireland. The area surrounding Drimnagh during this time was rolling hills and expansive forests that stretch to the Dublin mountains.

Throughout the 13th to the 15th centuries, the area around Drimagh was sparsely populated. Records said that only eleven people lived in these parts in the 18th century.

The castle has been witness to war and conflict and was even attacked a few times.

During a skirmish near Crumlin, two members of the Bromwell family were killed. The Bromwells lived in the castle until the early 17th century. There were more undocumented raids and battles in the castle even after ownership was turned over to Sir Adam Loftus until he became  Lord Chancellor of Ireland in 1619.

Since then, Drimagh castle was continuously inhabited by different families. After all the conflict abd attacks, businesses and industries slowly sprung up around Drimnagh. There’s the paper mill at Landsdowne valley, as well as the construction of small inns and lodges Inns and lodges.

A number of these are still in business until now like the Red Cow and The Halfway House. The rise of more enterprises continued throughout the 19th century, but it was in the 20th century that industrial and residential estates started flourishing in Drimnagh.

In the Drimnagh castle, the last residents were the Hatch family who lived there until 1951.

A few years after in 193, the estate was acquired by the Christian Brothers in 1953 who lived then built a school there the following year. They eventually built a separate building for the school within the castle grounds. The castle, however, fell into ruin in the next few decades.

In the late 1980s, a program was set up by well-known artist Peter Pearson along with An Taisce, the national trust for Ireland. The program was for the restoration and conservation of the castle.

Work took several years and was done by the mid-1990s.

Today, the castle is open to the public for tours. Visitors may see the Great Hall and medieval undercroft, and a  battlement tower with lookout posts. There are also separate buildings such as an old coach, stables and folly tower.

A must-see in the Drimnagh castle grounds is the 17th century garden with box hedges, an allee of hornbeam and mop head laurels. The place can also be a book for events like weddings.

RELATED READ:  Cork City Gaol: History And All The Things You Need To Know

Tweet
Pin1
Share
1 Shares
14 Places To Visit In Northern Ireland
King John’s Castle: History And All The Things You Need To Know