Situated by the River Ratty, Bunratty Castle is regarded as the most authentically restored and complete medieval fortress in Ireland. The name Bunratty means “river basin” or the end of the river that’s right next to it. It is also considered one of the must-see castles in Ireland. 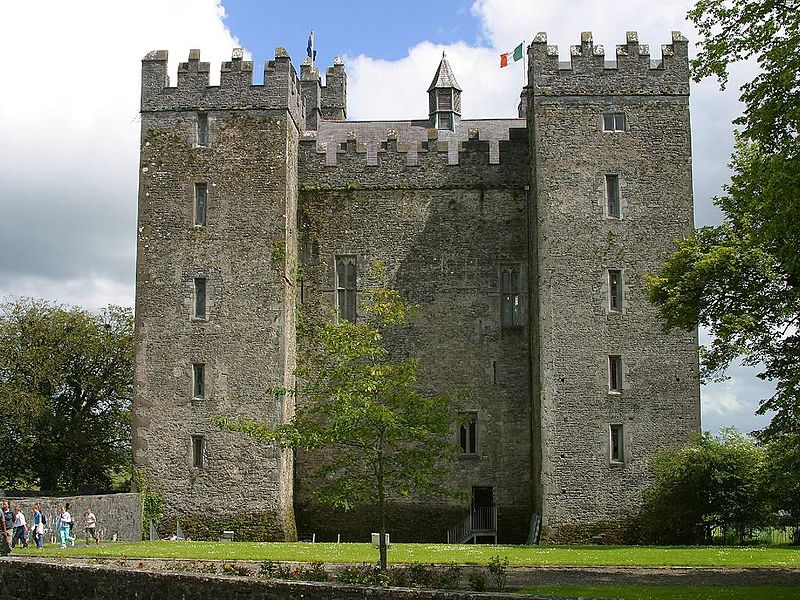 Built using grey stone, this County Clare castle is comprised of a single large tower house with five floors. The castle is known for its vast collection of medieval furniture and other items. There are 450 pieces on display, and all of them are genuine.

The friendly and knowledgeable guides provide trivia about each piece as well as on the life of former castle occupants. With the castle being in existence for 800 years, expect an impromptu history lesson during your tour.

It is widely believed that the Norsemen were the first occupants of the site of Bunratty Castle.

However, their settlement was destroyed by the Irish King Brian Boru in 977. Centuries later in 1250,  King Henry III granted Robert de Muscegros the district of Tralee. A motte and bailey castle was supposed to be constructed on the site. 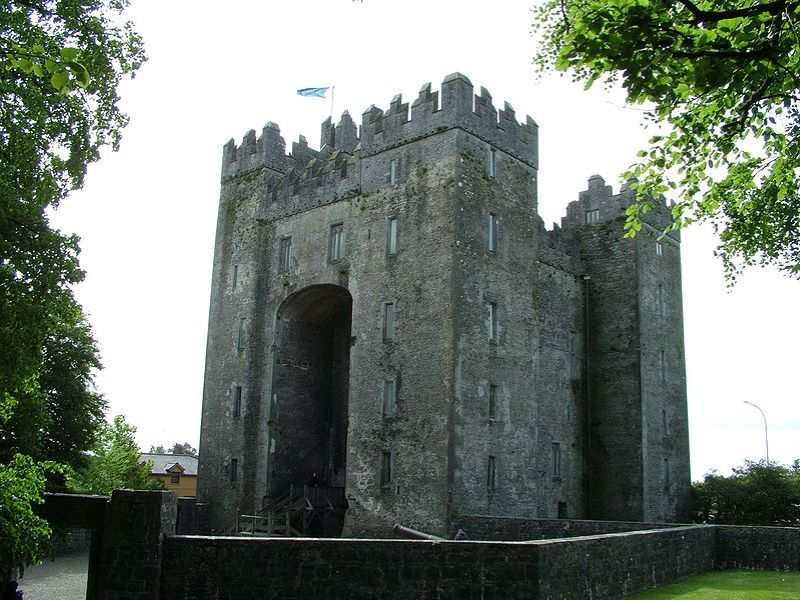 The following year, Muscegros instead cut down many trees on the castle grounds and used the place for the Bunratty fair. King Henry III took the castle back and granted them to Thomas De Clare in 1276.

Between 1278 to 1318, Thomas De Clare built the first stone building exactly on the site of the now Bunratty Castle. Soon after its completion, he and his son Richard was killed in battle.

The newly built castle was also destroyed along with the nearby town. The King of England then restored the castle building.

However, it again destroyed by Irish chieftains fourteen years later. It was left in ruins for about two decades before Sir Thomas Rokeby rebuilt it, only to be destroyed by the Irish again.

The Bunratty Castle that we see today was built by the McNamara family in 1425. Thirty years later during a battle, the castle was granted to the O’Brien clan. This was when they were granted the title ‘Earls of Thomond’ by Henry VIII.

The castle became the chief seat of the O’Briens. It was also one of the main strongholds of Thomond.

It was eventually taken by Thomas Radclyffe and granted to Connor O’Brien who was responsible for the many improvements in the castle.

Bunratty Castle was then taken by the Confederates during the Confederate Wars in the 17th century. The castle was then sold to the Studdert family, who also left in 1804 to move to a more modern residence. With nobody tending to it, the castle fell in disrepair. It was quite a huge story locally when the roof collapsed.

When Bunratty Castle was in danger of being demolished in 1954, Viscount Lord Gort bought it. The Viscount was an Irish medieval history enthusiast, he restored the castle with the assistance of the Tourist Board and Government. It reopened to the public as a national monument in 1960, and presently managed by Shannon Heritage.

The design of the Bunratty Castle that we see today was from the 15th century. It has a central keep, with four towers at each corner. In this central keep, you’ll find large halls. The towers meanwhile, contains the smaller rooms.

Aside from the main castle building, the grounds surrounding Bunratty also has gardens and parklands. In the same site, you’ll also find the Bunratty Folk Park,  This park contains a church, farmhouses, a pub, shops, and a lovely garden.

RELATED READ:  Dark Hedges: History And All The Things You Need To Know

If you are looking for tours to the castle, here are some of our recommended Bunratty Castle tours for you.